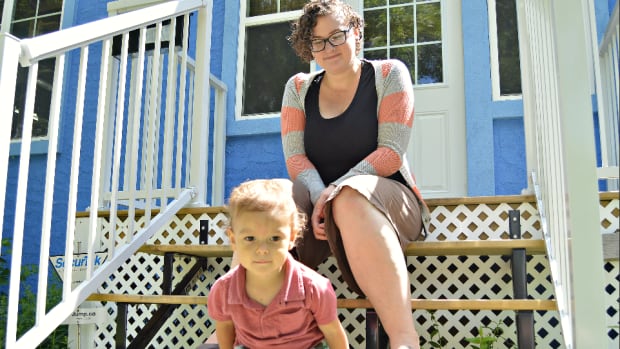 (Note: CBC does not endorse and is not responsible for the content of external links.)

After seven years of eating a vegan diet, Regina mother Alyx Millham has the lifestyle down pat.

So when Millham, 35, delivered her first child, there was no question that he would also eat a plant-based diet with no food, such as meat, eggs, or dairy products, that come from animals

Millham’s son Xavier, who is now 21 months old, has never drunk cow’s milk nor eaten meat. He hasn’t had a bowl of yogurt or a spoonful of ice cream.

A pediatrician agrees it can be a healthy way to eat, even for a growing child, as long as parents are able to provide all the child’s nutritional needs.

“It wasn’t really a decision,” Millham told CBC News. “It was more like, well, this is the right thing to do, why wouldn’t I have my child do it.” 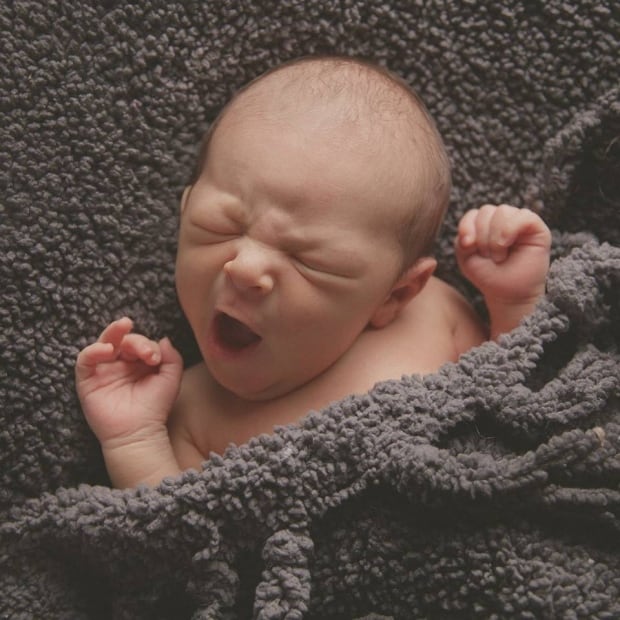 Xavier when he was six days old. (White Lotus Photography)

Dr. Ayisha Kurji, a pediatrician with the college of medicine at the University of Saskatchewan in Saskatoon, said there are pros and cons to any diet, but she’s never seen health issues arise for a vegetarian or vegan child because of what they eat or don’t eat.

‘If you meet all your nutritional requirements, then it can absolutely be a very healthy way for a child to grow and develop normally’
– Dr. Ayisha Kurji, pediatrician

“If it’s done properly and if you meet all your nutritional requirements, then it can absolutely be a very healthy way for a child to grow and develop normally,” she said.

Kurji said one of the biggest struggles vegan parents face is dealing with children who are picky eaters, something Millham says she’s experienced with Xavier from time to time.

“When you’re going through picky phases and you’re already limited in terms of choices, you certainly can end up in a situation where kids won’t take things,” Kurji  said. “Whereas with an adult, you can say ‘Here is a list of things you need to eat. You go and eat them.'”

Millham said Xavier loves foods like hummus, bread, fruit and soup. To supplement his nutrition, she gives him vitamin B spray, liquid iron and vitamin D. 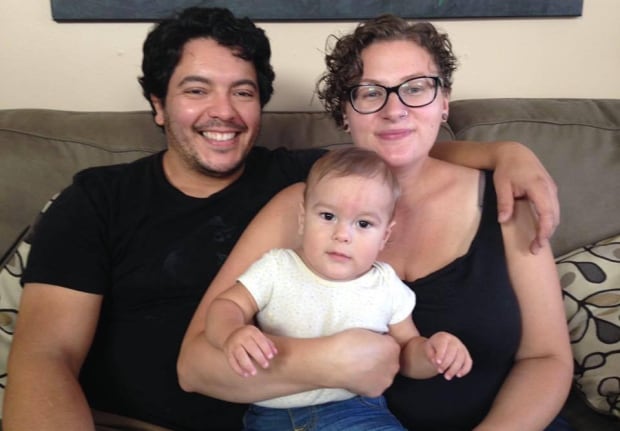 She said she isn’t worried that he doesn’t drink cow’s milk, despite a recent study saying it makes children taller. Last time she took her son to the doctor, Millham said, Xavier was in the 84th percentile for height and weight.

Kurji says cow’s milk is not necessary for a child’s development, and she becomes concerned when children drink a lot of it since it has no iron. She explained that anemia in kids most typically arises from an iron deficiency.

When they drink too much milk, they can get full from the calories, she said.

“Then they don’t eat enough iron rich foods and they end up with low iron which causes low hemoglobin. It’s one of the most common things we see in pediatrics,” Kurji said.

Millham said she became vegan after a serious car accident years ago that kept her in hospital for months. When she was released, she gained weight and was looking for a way to be healthier. She stumbled upon a weight-loss book based on being vegan.

While she admits the switch was first about vanity, it grew to be a big part of her life. Now, she says, her decision is rooted in animal ethics.

The transition to becoming vegan included a learning curve, she said, but over the years the world has become more receptive. She says her “weird cravings” diminished after about two years.

“It’s gotten so much better because everywhere has vegan food, and most restaurants have vegan options,” she said. 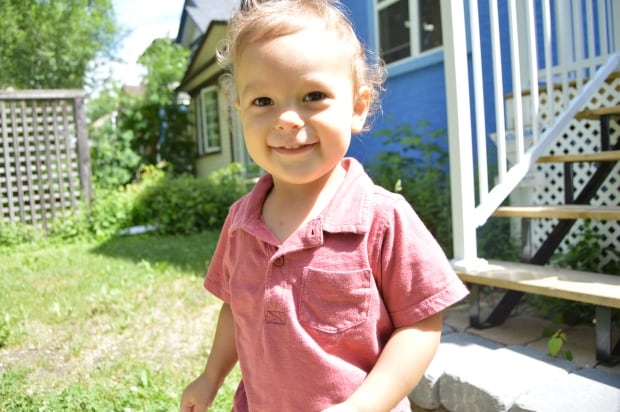 Millham said she read multiple books on nutrition during pregnancy and made sure to take vegan prenatal vitamins. She is still breast feeding and keeps an eye on her B12, calcium and iron levels.

“My doctor’s known that I’ve been vegan the whole time I’ve been vegan. She had no concerns,” Millham said. “It’s really common for pregnant women to be anemic. Everyone always assumed that, ‘Well, Alyx will be anemic because she’s vegan,’ but I wasn’t and my doctor was shocked that my numbers were so good.”

Plant protein sources aren’t as easily digestible as meat, according to Kurji, so more has to be eaten to reach the required amounts. Those who eat a common Western diet tend to get iron, zinc, calcium, omega 3 and B12 through animal sources, but it is possible to get all nutrients needed through fruits, vegetables, oils, nuts and grains. 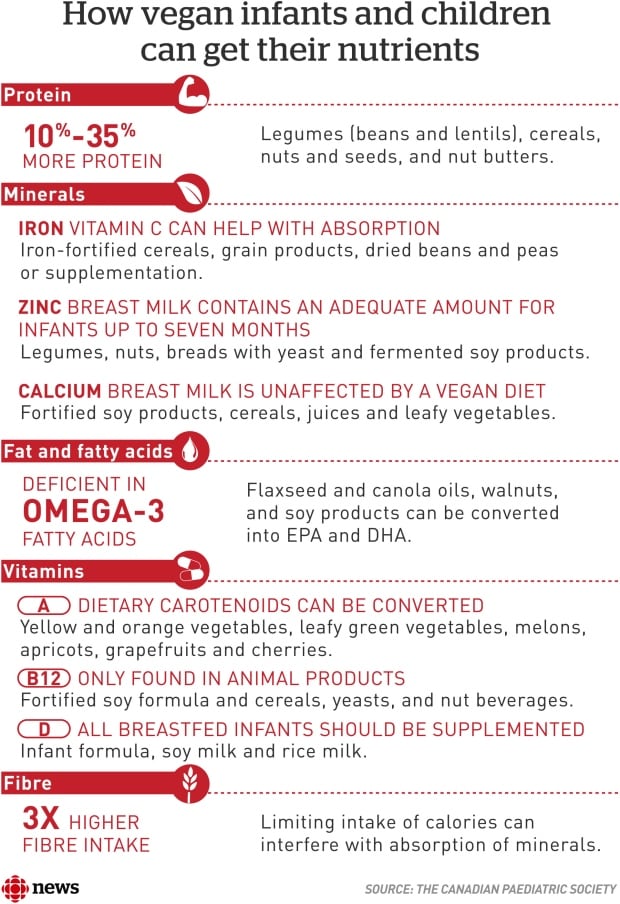 On the plus side, Kurji said, vegans tend to eat more healthy fats and vegetables than the average person, and they usually eat less fast food  because it’s harder to get vegan foods outside of the home.

“Having said that, you can also follow a diet that includes meat and have all those pros,” Kurji said

For those who say feeding children a vegan diet is too extreme, Millham said it’s not different than anything else.

“I think everybody forces their way of life on their family. That’s what parents do, they parent,” she said. “As long as a person’s not hurting other people — and vegans clearly are not — you’re OK.”

Although one day Xavier might choose to get off the vegan bandwagon, Millham said she isn’t too worried. In the future when she sends him off to birthday parties, she said she’ll be ready with vegan options for him to take.

“I realize that that’s not always possible, but we’re going to try, damn it,” she said, laughing.